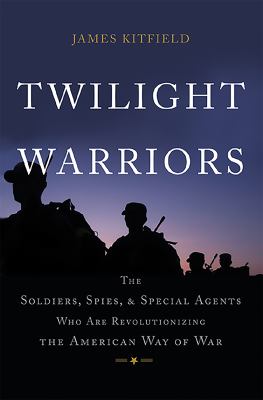 Twilight warriors : the soldiers, spies, and special agents who are revolutionizing the American way of war
by Kitfield, James.

"When U.S. troops withdrew from Afghanistan at the end of 2014, it signaled the end of the longest conflict in the nation's history. Yet we are still at war--no longer with other states, but with a host of new enemies, from nihilistic terrorists and narco-traffickers to transnational criminal cartels, lone wolf assassins, and modern-day pirates. Standing against these foes is a tight-knit fraternity of soldiers, cops, lawyers, and spies. Together, these men have broken down the cultural and institutional boundaries among their respective agencies to engineer a new, network-centric way of fighting: one that uses a seamless web of intelligence analysts, high-tech information networks, and Special Forces units to take the fight to America's enemies as never before. These disciplined, patriotic servicemen form a band of brothers that, over the past half century, has fundamentally reshaped the way America defends itself."--Provided by publisher.