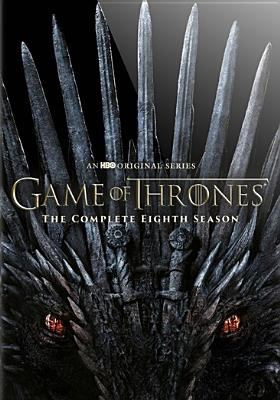 ( DVD
)
by
[Los Angeles, CA] : Home Box Office : [2019]  |
English subtitles for the deaf and hard-of-hearing (SDH).
"With the Army of the Dead--led by the Night King, his White Walkers and an undead dragon--bearing down on Jon and Dany and their combined forces, a denouement eight seasons in the making will be reached, answering a myriad of questions surrounding the fate of the series' protagonists. Meanwhile, Jon's true identity promises to undermine Dany's claim to the Iron Throne...and, or course, Cersei has a devious strategy of her own." --Container.
CHV Rating: 18A.
Home use only.