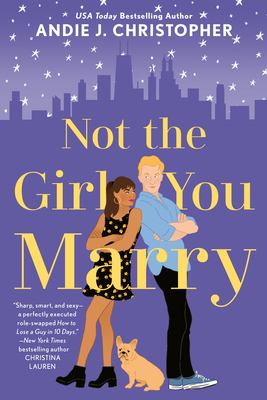 Not the girl you marry

( Book
)
by Christopher, Andie J.
New York : Jove, 2019.  |   First edition. |   320 pages ; 21 cm  |   9781984802682 (pbk.)
Jack Nolan is a gentleman, a journalist, and a would-be investigative reporter. Due to a combination of good looks and lucky (or unlucky?) breaks, he's become the how-to guy for a buzzy, internet media company instead of covering hard-hitting politics. Fed up with his fluffy job and the app-based dating scene as well, he reluctantly agrees to write an article on how to lose a girl in two weeks. Easier said than done when the subject of his experiment is Hannah Mayfield, and he's not sure he wants to lose her... Hannah is an extremely successful event planner who's focused on climbing the career ladder. Her firm is one of the most prestigious in the city, and she's determined to secure her next promotion. She's made a name for herself as the go-to Girl Friday for any event that's likely to get raucous. But the somewhat prickly Hannah has a bit of an image problem: she needs to prove to her boss that she has range, including dreaded, romantic wedding receptions, if she wants a corner office. When she meets Jack, he seems like the perfect man to test her romance knowledge on. Little does she know, he also has an ulterior motive.