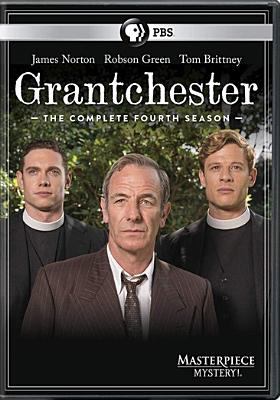 Based on "The Grantchester mysteries" by James Runcie.
Originally broadcast as part of Masterpiece Mystery! in the United States.
Special features: the making of "Grantchester 4"
Disc 1. Episodes 1-3
Disc 2. Episodes 4-6.
James Norton, Robson Green, Tom Brittney, Al Weaver, Tessa Peake-Jones, Kacey Ainsworth, Nick Brimble, Oliver Dimsdale.
It's 1956 -- a year since Amanda left Grantchester, and the post-war rulebook is being torn up. Sidney Chambers (James Norton) is feeling adrift, a man without a cause -- until American civil rights activist Violet Todd arrives and fires up his need for social justice. But with a cause this dangerous, Sidney might not be around forever. Soon there's a new Vicar of Grantchester, firebrand Will Davenport (Tom Brittney). Idealistic and energetic, Will embraces the change sweeping the nation and wants to make the paris his own. He finds himself drawn into Inspector Geordie Keating's world of murderous plots and crimes of passion that unearth his own troubled past. And while Will embraces the future, Geordie (Robson Green) is left entirely baffled by it. Navigating a world without Sidney, where does he fit in?
Not rated.
DVD ; widescreen presentation ; 5.1 surround.
Home use only.
In English ; English subtitles for the deaf and hard of hearing.