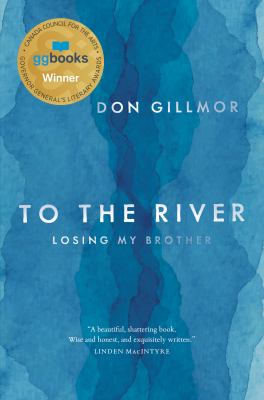 To the river : losing my brother

( Book
)
by Gillmor, Don.
Toronto : Random House Canada, [2018]  |
Author Don Gillmor attempts to understand why his brother took his own life, which leads him to question why baby boomers are killing themselves at a far greater rate than the Silent Generation before them or the generations that have followed? In the spring of 2006, Don Gillmor travelled to Whitehorse to reconstruct the last days of his brother, David, whose truck and cowboy hat were found at the edge of the Yukon River just outside of town the previous December. David's family, his second wife, and his friends had different theories about his disappearance. Some thought David had run away; some thought he'd met with foul play; but most believed that David, a talented musician who at the age of 48 was about to give up the night life for a day job, had intentionally walked into the water. Just as Don was about to paddle the river looking for traces, David's body was found. And Don's canoe trip turned into an act of remembrance and mourning. At least David could now be laid to rest. But there was no rest for his survivors. As his brother writes, "When people die of suicide, one of the things they leave behind is suicide itself. It becomes a country. At first I was a visitor, but eventually I became a citizen." In this tender, probing, surprising work, Don Gillmor brings back news from that country for all of us who wonder why people kill themselves. And why, for the first time, it's not the teenaged or the elderly who have the highest suicide rate, but middle aged men.